For my personal response I chose to reflect my ideas and opinions about how I feel about the genocides we have learnt in class.

What is a genocide? The deliberate killing of a large group of people, especially those of a particular ethnic group or nation, I prefer to call it a massacre, crimes against humanity. Alone in the Rwanda genocide millions of Tutsi were killed which meant 100s of thousands of kids were orphaned. This genocide was the one that really hit me because of how close it was to the country I was born in which is Nigeria. I began to question if it would have spread to other countries, would I even be alive right now. I become more grateful for the little things I have in life, and hold closer to the things of significance in my life. I expected that in my generation after everyone sees the horror in a genocide, they will put all effort to assure history not repeating itself. But in society now we see groups such as ISIS and white supremacy groups trying to get rid of a certain group due to their ethnocentric views. ISIS believes all individuals should become muslims, and if they choose not to they are executed, they achieve this by any sort of violence. Groups such as white supremacies are trying to get rid of any race especially muslims out of their country, although Donald trump isn’t one his actions portrays the actions of an individual who has the same beliefs ass terrorist groups. The reasons why such genocides are able to happen in the world, is because in each genocide there is always a strong leader, who is able to twist the minds of innocent and force them to do their evil bidding. After the topic of genocide was brought up in class I had to go back and watch the movie about the Rwanda genocide just to have a visual of the horrors that had happened, and it wasn’t easy to watch. I am very grateful to have parents who raised me to see that everyone is human, and everyone is alike in that way. My parents are my mentors and taught me that in this day and age we need to accept change because their is nothing wrong for an individual to be different. My religion has taught me about the golden rule which is treat everyone the same way you would like to be treated, which means equality.  I believe if every individual in the world is given the opportunity to be educated about the horrors of genocide we can make our world genocide free where everyone sees one and another as equals. 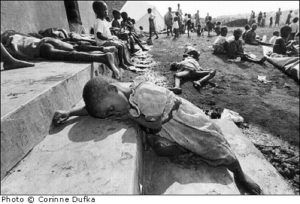 One thought on “The genocides”