(The following short story is a creative response to the visual given below, and is based on the following question: “Discuss the ways in which individuals struggle to restore honour and certainty”). 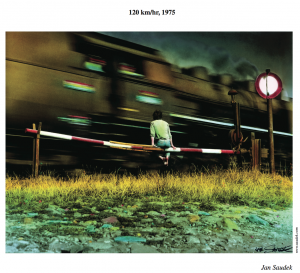 My ears begin to ring loudly, drowning out the morning singing of the hummingbirds nesting in the deciduous trees that line the prairies. With tears burning my eyes and impairing my vision, I watch woefully as my shiny black escape zooms past me, causing my heart to sink to my stomach. I jerk my arms forward, as if I could reverse time and grab onto the train for dear life. I feel my stomach churn as it slips through my fingers, leaving me frozen and alone on the wrong side of the platform. Numbness settles in as I realize the helplessness of the situation—it’s gone. My shot in the city; my shot at starting over; my shot at redemption—all gone in a matter of seconds. I was foolish to think that I would ever be able to start fresh. As if.

As my hands shakily rejoice back to my sides, I check my grandfather’s silver watch for the time. Anguish begins to flood my veins as I read the clock: 8:50 A.M. Today’s train wasn’t supposed to leave until nine. I was early—10 whole minutes early! But when does anything ever work out in my favor? Unable to hold onto anger any longer, I cringe at my self-pity; I know I shouldn’t be surprised. I don’t deserve this chance. I know I don’t. Not after December of 1963. Suddenly, my cheeks flush deep red to match the color of the stop sign to my left. I claw my fingernails into my forearms, and feel ease as I begin to breathe slowly once again, comforting myself with the feeling of daggers ripping into my skin. How incredibly foolish am I for thinking that perhaps I was destined for something more than this over-romanticized, lonely rural life after the accident? With shaking knees, I step towards the platform and stare at the deceivingly joyous candy-cane like bar that separates the farmland from the tracks—separates life and death. I sit in the middle.

As if immediately put into a melancholy state of contemplation, heart wrenchingly detailed flashbacks present themselves in my eyes. She was finally going to meet me today. After twelve whole years. I suffered twelve whole years without seeing my beautiful wife’s face—and now? I never will again.

“Don’t you dare keep me waiting,” she had whispered over the phone, “I’ll leave five minutes after ten.” I knew that she was trying to put on a strong persona, influenced by her anger and pent up grief, but never had I heard a more lovely sound. After she had hung up, I lingered on the line and zoned out the beeping, pretending that she was still there; laughing in her silky voice, chatting with me for hours about nothing in particular. I liked to think that she did the same.

I feel a pang in my chest as I recall yesterday’s minute-long phone call. I had finally been able to get her new phone number from a distant friend after two full years of searching after prison. Perhaps it was foolish for me to do so—but what was more damaging than being locked up for ten years with nothing but my own terrifying thoughts was my wife’s perception of me. I lost my honor, and consequently lost her. And I have worked tirelessly every day since trying to overcome my past and salvage my dignity for her sake, thinking that maybe if I pretended like things were how they used to be, I would wake up one morning and dismiss the past twelve years off like a meaningless nightmare—but what good is being reputable if no one’s there to give a damn? How can I be honorable myself if no one else thinks so? Make one mistake, and it’s over. There are no second chances. I know that now.

I sit quietly—helplessly—isolated from my surroundings. My resentment towards my past is overcome with the pain of hurting her. I can’t believe I’ve done it again. Perhaps it was selfish of me to reach out to her after all these years, but her face is embedded permanently in my brain—I think only of her, and see only her. I need to know if she still loves me. I needed to know. I can’t bear to live without knowing—and that’s the only thing I know for certain.

Overwhelmed with grief, I begin to mumble under my breath: “My damned image is everything in this world. I can’t even deny it myself…they told me things I wasn’t at the time, but I surely became it later. They give you no choice. All it takes is one damned mistake…” I feel my fingernails dig deeper into my thighs now, my body trying desperately to regain control of my emotions. “You can’t be sure of anything. Your future, your relationships—hell, you don’t even know what tomorrow’s going to look like. Everything’s fine until one day, when your fears materialize…”

It was one drink too many, and a terrible decision to drive. I don’t remember the night at all. I woke up hospitalized, and the doctor told me I had run a man over. I said, “Me?! No way in hell. Why would I ever do such a thing?” and just like that, all that I’ve ever known was snatched away from me, including Anna. I hurt the undeserving man, I hurt his family, and I hurt her—I don’t deserve to be forgiven. I continue to hurt her today. Especially today. There’s no way in hell she’s coming back to me now.

My heart races at the realization, and I feel my meager sense of hopefulness completely drain away, and with it, my desire to live. My uncertainty entailed a sense of hope, and drove my pursuit to redeem my honor, and ultimately, my certainty. But all of that is gone now.

I hear the 9:30 train approaching, and inch closer towards the tracks, moving myself away from the barrier. The harsh, cool winds that result from my 120km/hr escape lash at my face, but I feel numb. The sound of the steam engine gets louder and louder—but I can only hear her voice. I take one final step, and close my eyes.