Throughout the film Schindler’s List from director Steven Spielberg, we see a shift in the character of Oskar Schindler as his motivation moves away from profit and more to protecting the well-being of others.  Up to two hours into the film, however, he was still clearly driven by money with aiding others coming as a second priority, that is until he sees the Nazis burning hundreds upon hundreds of Jewish bodies.  It is at that point he realizes the scale at which Jews are being massacred, and the devastation he experiences is only exemplified when he sees the young girl in the red coat, now dead, being carried over to the pile of burning corpses.  From here, we see Oskar’s priorities shift, no longer looking just to benefit himself but to help those in need.  I wrote this as a bit of a character study as I wondered what may have been going through Oskar’s head at the time.  This piece is meant to be taken from the perspective of Schindler when he sees the burning bodies, just after he sees the corpse of the little girl in the red coat.

I just stood there.  Motionless.  Was there anything I could do?  I had heard stories of the crematories, the burnings, but this?  It didn’t feel real.  It felt like something taken right out of a dystopian novel, something that looked out of place in the world I had grown up in.  “This isn’t real.  This isn’t real.  This isn’t real,” I kept mouthing to myself, but unfortunately, I knew better.  This was the reality we were living in.  One bred of violence and prejudice, and the fruits of that reality were lying right in front of me.  I felt almost like a child, finally seeing the world as it was, filled with cruelty, completely eradicating my previous innocent views on humanity.  For the first time since this war started, I felt pain. Pain for those suffering.  Pain for those who would be nothing but soot within the day.  Pain for those who had to carry brothers, sisters, friends, to be burned as if they were nothing more than useless garbage littering the streets.  Pain for those who would be remembered by no one, their memory lost to the wind.  Just. Pain.  How long had I been suppressing this pain?  This angst? 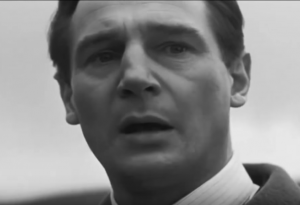 I don’t know how long I stood there, just taking in the horror, but it was long enough for Amon to notice something was up.  He tapped me on my shoulder, acting as a rope to drag me back to the here and now away from my thoughts, telling me that it was time to leave.  I made no verbal response back, the scene had stripped me of my ability to speak, and just looked back at him and gave him a nervous nod.  It took all my willpower to step away from the mass of bodies, trying my best not to look back.  Instead, I focused all my attention on the faces of the Nazi officers I passed by, that, however, was a mistake as well.  Every single one of them had nothing but emptiness written on his face.  Just standing there.  Silent.  That was when a new revelation hit me.  This was normal.  What they were doing was normal.  The daily grind.  But had they accepted this reality?

Had they really just thrown away their humanity so easily?

By the time I had reached the vehicle, I felt sick to my stomach.  The scent of burning flesh had finally permeated my nostrils and I had trouble masking the disgust on my face.  Amon seemed to notice, though he only glanced my way before turning his attention back to getting inside the car.  Despite how this scene should be a normal sight to him, even he seemed in a rush to get in the car. Even after all he’s done, is there truly still a shred of humanity within him?

Stepping into the car, the waft of burning flesh continued to pursue me.  Even after I closed the door behind me, the disgusting scent still remained.  The scent of loss.  The scent of suffering.  I glanced out the window and my gaze was brought to the thin level of soot that decorated the vehicle.  That soot no longer was an annoyance, it was a reminder.  A reminder of the kind of cruel reality that we live in.  The one that I endorsed.  I removed my gaze from the soot as the driver of my vehicle began to brush it off and down to my pin.  This pin.  It was another reminder.  A harsh reminder.  I endorsed this.  I supported the Nazi party, blissfully unaware of what that entailed.  I had seen so much suffering, so much death, yet I paid it no mind, thinking it all to be just a repercussion of war. But no.  This was different.  This was more than that.  How had I been so blind?

My ignorance had left me in the dark at what was really going on, but this revelation brought about a new thought within my mind.  “There must be something I could do.  Something to liberate those from a grisly fate such as this.”  Maybe it was wishful thinking, on my part at the time, but the thought gave me refuge, knowing that unlike all of these officers, I had still held onto my humanity.  And maybe.  Just maybe.  I could do something with this.  Something no one else could do.  Would do.  As the car pulled out, my resolve felt strengthened.  I had another plan coming, and this time, morality was the motivator.

As the car pulled out, I took one last glance at the ever-growing pile of bodies. The last thing I saw was the little red coat, slowly burning, the colour mixing in with the flames, but at the same time, dancing in the breeze.

4 thoughts on “Everything Has Changed – A Schindler’s List Response”