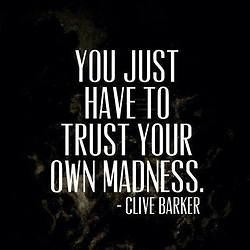 The concept of madness is deemed an idea for the wretched. Madness has a certain stigma to it where the words are almost always uttered with a negative connotation. Well what about the beauty behind the madness? What about the fact that madness is actually a trait you can be gifted with. Madness in obsession is indulging yourself towards a goal so much it consumes you. Why is this considered a bad thing? I have found that both in classical literature as well as contemporary literature, from both eastern and western points of view, madness is a prominent theme which is often characterized as hindering an individual. I am here to tell you, it is far from the case.

In William Shakespeare’s play Hamlet, the main character Hamlet is portrayed to be “mad” and the people around him think that he has lost his mind. I argue that Hamlet did indeed go mad following the death of a loved one, however his madness was not what everyone else in his life thought it to be. In the second scene of the first act Hamlet says: “O, that this too too solid flesh would melt Thaw and resolve itself into a dew! Or that the Everlasting had not fix’d His canon ‘gainst self slaughter! O God! God! How weary, stale, flat and unprofitable, Seem to me all the uses of this world!” In this scene, Hamlet is basically saying he wishes his skin would melt and turn into a dew. He is not only upset about his fathers passing, he is greatly affected by it in terms of his mental state. This is the first time in the play we see how his mind state is. By him saying this, he has essentially started to have crazy thoughts and thoughts of his own demise. Anyone who would read this would think that Hamlet has gone mad and will falter, however I think that it was this madness which allowed him to execute his future actions. The reason I would think this would be because of what Hamlet says in the fifth scene of the first act, he says: How strange or odd some’er I bear myself (As I perchance hereafter shall think meet To put an antic disposition on)”. Hamlet blatantly tells his friends that him acting crazy is an antic he is putting on and therefore establishes that Hamlet is indeed in control of what he is saying and doing. Hamlet’s initial madness led him to become motivated and then realize what it is that he must do. Although it was due to pain, Hamlets madness was actually beautiful; it gave him time to figure himself out.

In a similar manner I do feel a sense of madness in my own life. In the last little while, specifically the last month of my life I have felt a certain feeling come over me. I tend to behave erratically and can’t seem to find some self perpetuating happiness in my solitude. Similar to Hamlet, the death of a close family member left me with lots of questions and wonderment as to not only “why”, but more philosophical ideas such as the “why” to my existence. I have found that perhaps my madness, which to anyone on the outside could be assessed as madness, was actually a cure. In my efforts to solve the questions I so eagerly desired answers to, I ended up closing myself out. It was here where I found a certain “method to my madness”. I was able to synthesize ideas and poems seemingly light years beyond what I had previously been accustom to. I found a new liking towards music and songs I had never before been interested to, and I had started to find a purpose. In my efforts to dispel and perhaps repress emotions, I ended up in a state that I would even claim to be madness. What came next was I would proudly claim as beautiful.

These two stories, one being extremely personal and real and the other being a story written by a writer a long time ago; allowed me to establish that MADNESS IS BEAUTIFUL. The universality of it would not be the actual act of madness, but what comes from it. From darkness light emerges, perhaps from my own solitude purpose would emerge. I would genuinely say that it is human nature to come back stronger when the initial aspects of madness onset. Hamlet found a task from his madness and perhaps I found a purpose. It is hard to say whether what I have claimed about myself is either completely true, or a figment of my imaginative madness. It is hard to say whether Hamlets madness was indeed a product of execution from his real madness, or simply all in his head. At the end of the day who is to really say, after all if beauty is in the eye of the beholder, then madness is beautiful.